On Wednesday, November 10, I took the well to speak in opposition to HB 1 EX, the Republican redistricting map for the House. We have finished the Special Session the Governor called for reapportionment and redistricting, and the Governor's signature will soon be on laws creating new maps of Georgia senate and house districts and federal congressional districts. 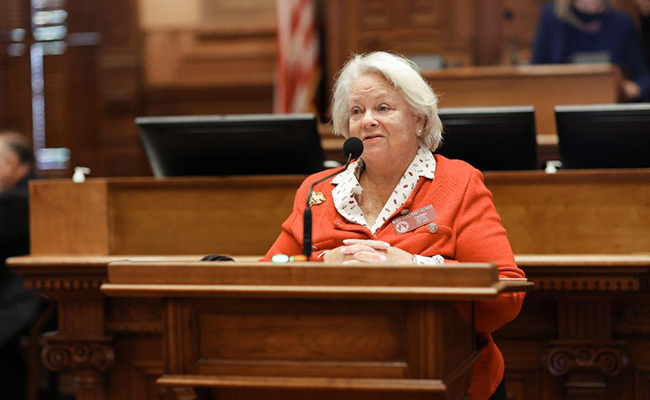 On Wednesday, November 10, I took the well to speak in opposition to HB 1 EX, the Republican redistricting map for the House.

We have finished the Special Session the Governor called for reapportionment and redistricting, and the Governor's signature will soon be on laws creating new maps of Georgia senate and house districts and federal congressional districts.

In a process that felt rushed partly because of the late arrival of U.S. Census data and partly because Republicans took no time to genuinely discuss the maps presented by the Democratic caucuses of either chamber, the Republican maps passed almost entirely along party lines. Those maps retain Republicans’ power in a state that is actually more closely divided than the new maps suggest.

Along with my Democratic colleagues in the House, I spoke against the House Republican map on Wednesday, November 10. You can watch the entire floor session on the House website, but the video below is of my portion. Among other things, I reminded my colleagues that we should approach redistricting with humility: none of us owns our district; the districts belong to the people in them, for whom we work.  I also expressed concern about communities of interest: “The Stonecrest community is split into three separate districts. My city of Decatur, where I’ve practiced law for a good while, if I had the corner office, which I don’t, I could look at three different districts. The city of Decatur is four square miles. It has four representatives. The district line separating House District 91 and House District 116 divides the community of Stockbridge and the Groveway community in Roswell. A community of African American churches that vote and pray together has been divided by a split precinct.”

There are several problems with the maps produced by Republicans:

In case you missed it:

AJC Article comparing this year’s redistricting process to those in 2001 and 2011.

The redistricting process for the U.S. Congressional Districts finished today, with the House passage of SB 2 EX along partisan lines, 96 to 68. The Republican drawn maps will go into effect after the Governor's signature. Democrats again objected to the rushed process, the impact on minority opportunity districts and communities of interest, the splitting of precincts and counties, and the overall division of the state into 9 Republican and 5 Democrat districts, rather than a 50/50 split of 7 per party, or maintaining the 8 Republican and 6 Democrat seats in Georgia's current map.

The 6th District, currently represented by Rep. Lucy McBath, received the most attention, with my Democrat colleagues saying the Republican map unfairly targeted Rep. McBath and likely will deprive her current district of returning their selected candidate to Congress. Her district has been modified to draw in reliably Republican areas of Dawson, Forsyth, and Cherokee counties.

﻿Rep. McBath reacted with an immediate announcement that she will run in the neighboring 7th District, currently held by Rep. Carolyn Bordeaux, who flipped that district Democrat in 2020. The new map makes the 7th a more secure Democrat seat than in the last election.

A LOOK AT THE MAPS

Above, changes to the U.S. Congress sixth and seventh districts, and below, the new (left) and current (right) congressional maps for the state.

As you know, I chair the Metropolitan Atlanta Rapid Transit Overview Committee, a joint committee of the House and Senate charged with monitoring the financial and management activities of MARTA. MARTA must file a quadrennial management audit with the state, as well as an annual financial report. The next quadrennial audit will be in 2024.

On Wednesday, November 17, I called a hearing of the committee. You can watch the full hearing here.

We heard from Jeffrey A. Parker, General Manager and Chief Executive Officer of MARTA. Mr. Parker reported on the impact of COVID-19 on ridership volume, transit patterns, and the MARTA workforce; made projections for expected infrastructure money; and discussed projects underway and planned, including transit oriented development. He answered questions from committee member Rep. Martin Momtahan (R, HD 17 Dallas) and from Rep. Sandra Scott and Rep. Viola Davis in the audience.

MARTOC will continue to carry out its statutory obligation to monitor MARTA finances and spending.

The Study Committee on Annexation and Cityhood met for the last time on Thursday, November 18. The Association of County Commissioners of Georgia and the Georgia Municipal Association have been active stakeholders in the hearings of this committee and provided comments throughout the process. Among other things, the committee report recommends:

The final report will be published soon, and I will share it with you on Facebook. Committee members will be drafting legislation to be filed in the 2022 Session that convenes on January 10.

Because the committee failed to address some of the recommendations I made relating to reform of Development Authorities, I intend to prefile legislation that outlines other proposals.

You will find videos of all the committee meetings and the report here.

A group of bipartisan legislators is working on legislation to address the state of mental health services in Georgia. Georgia was recently ranked 48th among all states by Mental Health America. The legislators will work on additional funding as well as getting insurers to treat mental and physical health comparably (known as "parity").

I have been deeply involved in this work for years, most recently as part of the Georgia Behavioral Health Reform and Innovation Commission, which made recommendations last year to the Governor. Those recommendations continue to work through the system and may result in legislation during the upcoming Session. Stay tuned.