In many ways, Sine Die 2021 was typical: chaos, conflict, and last minute surprises before the ritual tearing and tossing bills at the end. But this year, there was an unusual level of tension, extra security, and protestors around the voting bill and Rep. Park Cannon's arrest (photos below). All those created some logistical obstacles as well as heightened conflict on the floor and off. The anger from many was authentic and expressed. 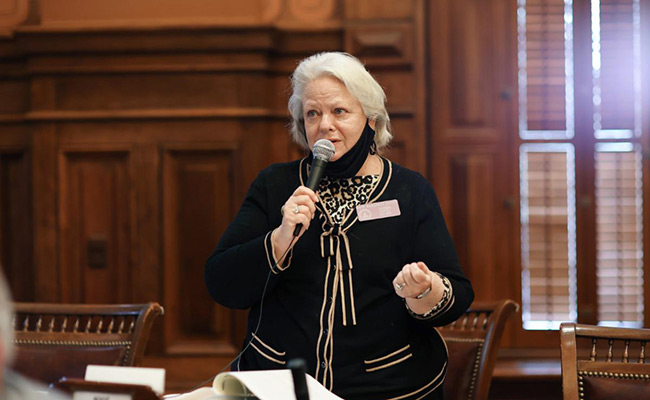 In many ways, Sine Die 2021 was typical: chaos, conflict, and last minute surprises before the ritual tearing and tossing bills at the end. But this year, there was an unusual level of tension, extra security, and protestors around the voting bill and Rep. Park Cannon's arrest (photos below). All those created some logistical obstacles as well as heightened conflict on the floor and off. The anger from many was authentic and expressed.

On Day 40, I was responsible for three measures, each of which passed between about 6:00 pm and 10 pm. DeKalb County's number one priority was HB 579, a general bill that passed in the Senate and is described below. Also passed: the city of Decatur Homestead Exemption, despite a fair amount of conflict and negotiation. I also worked hard on HB 660 to help Fulton County Superior Court judges get relief from MARTA caseloads by changing the law to allow cases against MARTA also to be brought in Fulton State Court. HB 660 was added by amendment to HB 714.

We ended this most unusual Session with a budget of over $27 billion for fiscal year 2022 . In my opinion, as you will see below, some of the new laws are good, some are not so good, and some have either benefits or problems yet unknown.

While Covid dominated most of our Session, thankfully and perhaps most miraculously, of the approximately 100 legislators who contracted Covid, none died. Much credit for our safety goes to Speaker Ralston's insistence on enforcement of Covid protocols for testing, masking, and distancing.

SOME OF THE GOOD BILLS THAT PASSED

The bills that passed both chambers are now in Governor Kemp's hands and will become law in 40 days (on July 1) or on their effective date if he signs them or does not veto them in that time period.

Repeals the antiquated and abused Civil War era law that allowed arrest by private persons. With this repeal, arrests can be made only by authorized law enforcement officers, with certain specified exceptions relating to detention in retail, restaurant, and lawn care areas. Citizens arrest was a possible defense to the extrajudicial killing of Ahmaud Arberry.

Allows such facility authorities to issue bonds without holding a county referendum. I sponsored this bill at the request of DeKalb County.

My hope is that the conversation started when I filed HB 23, HB 24, and HB 66 (which did not pass) will continue so that we can achieve better and more transparent annexation policy applicable statewide. I have already asked and hope to serve on this study committee.

Grants three weeks of paid leave to “all eligible” state employees and local board of education employees in the event of the birth of a child or the placement of an adopted or fostered minor child. Eligibility and time allowed are specified by length of time of employment. Applies regardless of whether the person is eligible under federal law. Approximately 250,000 state employees will be affected by this bill.

There is a current procedure set by law whereby an indicted elected official can be suspended from office with pay. SR 134 would allow voters to decide on a constitutional amendment to end pay in such circumstances.

Changes the Georgia Civil Practice Act and adds a section to allow cases against MARTA to be brought in either State or Superior Court in Fulton County. Fulton County judges asked for this change.

Allows practicing pharmacists, EMTs, firefighters, nurses, and cardiac technicians to administer vaccines in public health emergencies. My father was a pharmacist for over 50 years and routinely gave us shots, so I supported this bill that interested many of you.

Among other things, lowers the age required for petitioning to adopt from 25 to 21, provided other conditions are met, and clarifies provisions relating to out-of-state residents and termination of parental rights.

Automatically enrolls and renews into Medicaid the many children who apply for and are eligible for the Supplemental Nutrition Assistance Program (SNAP-- food stamps).

HB 567 Newborn Screening and Maternal Mortality Reporting Gives flexibility to add disorders to the newborn screening panel when recommended by the Newborn Screening and Genetics Advisory Committee and tightens the time period for providers to report information on maternal mortality to the state.

GOOD BILLS THAT DID NOT MOVE

Would raise the age of juvenile defendants in all criminal cases from 16 to 17. We are one of only two states left that treat 17 year olds as adults. While the bill passed the House for the first time, it was stopped in the Senate by the Department of Juvenile Justice and county sheriffs on alleged financial and manpower burdens. Very disappointing, but we will seek passage in the Senate next year.

Would require 50 rather than 30 years of groundwater monitoring at Georgia Power's closed coal ash ponds. After passing the House, this bill did not make it out of Senate committee. It was a baby step toward what we really need: coal ash residuals moved to lined landfills, as in my bill that died last year and this year's effort with Rep. Debbie Buckner, HB 176. The Chair of the House Committee on Natural Resources did not allow HB 176 a requested hearing. We will continue to push for protection of Georgia's water resources against Georgia Power's powerful lobby. Next year.

HB 334 Remote Notary Act Allows and sets standards for remote online notarization of documents in certain circumstances, as occurred during Covid under special rules. Some real estate closing attorneys are strongly opposed. One of the things that Covid highlighted is the need to move systems fully into the digital age. I voted YES on this bill, but it did not get through both chambers.

THANKFULLY, THESE DIDN'T MAKE IT

Would expand license to carry weapons to allow out of state residents to carry a weapon in in Georgia if they are licensed to carry in their state of residence, regardless of whether that state's laws are less restrictive. Credit goes to Speaker Ralston for not letting this one back onto the House Floor in the wake of two mass shootings and after the Senate attached unrelated amendments, as reported on Twitter by journalist @Rahulbali https://twitter.com/rahulbali/status/1377493446060048384?s=10

A well-intentioned bill that purported to address the problem of Covid patients dying alone. But the final bill left too many questions unanswered, including the problems associated with allowing visitors in hospitals without regard to health emergencies, which could endanger the life of the patient, the visitor, and even others. The Georgia Hospital Association opposed it for many reasons. I voted NO in the House and the bill stalled in the Senate.

﻿I voted NO on this midnight removal of a jet fuel tax credit for Delta, brought just after Delta CEO Ed Bastian voiced Delta’s opposition to the new elections bill. As Minority Whip Wilkerson said, this was a retaliatory use of legislation. The Senate did not take it up, so the fuel tax credit stands.

Would create a course to educate drivers about interacting with law enforcement officers. The House debate was emotional and intense, with many Democrats arguing that this bill puts the onus on drivers rather than on law enforcement for handling traffic stops. Too often, such traffic stops involve apparent racial profiling or violence against Black and Brown people. This was a bad bill brought at a bad time.

Would require transgender students to compete in sports according to their "reproductive biology and genetics" identified at birth. Just another bad idea born of misunderstanding of science, fear, and lack of compassion for transgender teens. And it's plainly mean to point at, never mind legislate against, someone's child because they don't seem "quite right."

Contrary to its stated intent to reform cashless bonds, this new law imposes financial obligations on people who cannot meet them, thus further stressing our already overcrowded jails. I voted NO.

Restricts the ability of local governments to reduce police budgets by limiting the reduction to no more than 5% in one year or 55 cumulatively over the course of five years. A response to the idea that cities and counties will try to defund police entirely. I voted NO.

THESE PASSED, BUT WE'LL SEE

Appoints a Chief Labor Officer for one year and requires the State Labor Department to report to the House and Senate every week on the status of unemployment and related claims. A result of complaints about the Department of Labor's response to unemployment claims this year. Everyone agreed the Department had difficulty this year--many legislators including me received complaints from constituents who could not get through to the Labor Department on their claims. Opposition focused on whether the General Assembly should step in over an elected official like the Commissioner of Labor. We will see if this works to streamline the system and take care of the backlog.

SB 100 Time for a Change? The conflicting bills in the House and Senate came to a compromise: to use Standard Time year round until Congress authorizes states to change to year round Daylight Saving Time. Confused? We'll see if Governor Kemp signs this one.

Requires express approval of a separate local law or intergovernmental agreement for the boundaries of the City of Atlanta independent school systems to be extended by annexation. Again, many people worked on this bill and Dekalb legislators with districts in the City of Atlanta, such as HD 82, helped.

Reorganizes traffic and jury divisions of state court and increases salaries for judges.

Provides for filling vacancies in mayor and council positions.

Expands the city boundaries to include property on Rock Chapel Road and Stoneview Elementary.

﻿Rebalances the relationship between the mayor and city council, weakening the mayor's power.

By now you have read many articles and seen TV reports about SB 202 changing Georgia’s election laws. You can use the link to download and read all 98 pages, but below are a few significant provisions.

In short, all of the things that made voting easy and contributed to the unprecedented turnout in the 2020-21 elections have been either eliminated or severely cut back. Because some of these were changes that had never been codified, Republicans say that voters are getting more opportunities and security than what we’ve ever had. We won't know the impact of all this until 2022, but there are court battles already.

The time period between an election and a runoff has been reduced from 9 weeks to 28 days. Less time to vote absentee and less time to "cure" ballots.

It will be illegal to deliver food or water to anyone waiting in line, if such delivery occurs within 150 feet of the line.

Out of precinct ballots will now be invalidated if they are cast before 5 p.m.

And Here's What No One Is Talking About Enough:

‍What Can You DO?

Many of you are asking what to do now that 202 is law. Litigation is underway, corporations are reacting in multiple ways, debate is still intense, and we don't know what the U.S. Senate will do with the For the People Act passed by the U.S. House. Watch for the U.S. census in the fall and our work on reapportionment, volunteer or give money to any one of the many groups working to protect voting rights, and keep in touch. Stay engaged.