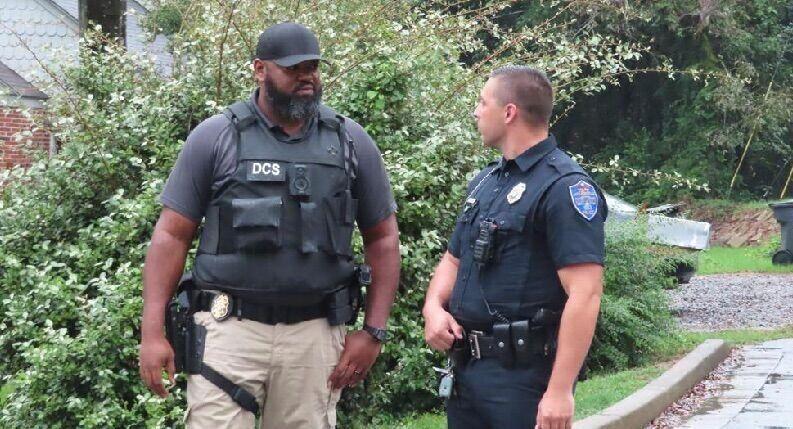 With law enforcement officers often on the frontline of responding to mental health emergencies, many agencies agree that mental health resources would help lighten the load on the profession that already struggles to attract employees.

Georgia legislators acknowledged the growing need of mental health services and its impact on first responders, and approved a reform package that includes creation of local "co-responder programs."

Under SB 403, local law enforcement agencies can apply for a grant that would allow local community service boards to provide a behavioral health specialist to assist law enforcement officers responding to a crisis either virtually or in person. With guidance from a licensed counselor, officers will have the authority to refer a person to a treatment facility rather than make an arrest.

Departments that have expressed interest in starting the program, she said, have questioned whether the program should be available 24 hours or be shifted toward times of day when mental health calls are greatest.

"Workforce is an issue everywhere across Georgia, particularly in mental health fields, but we've set up also new training mechanisms for co-responder programs," Oliver said. "So we're gonna see a lot of growth this year and I'm very pleased with the progress."

Few agencies in various states had already taken the initiative to create a co-responder model in recent years.

Metro Atlanta's Brookhaven Police Department started its co-responder program during the height of the pandemic in 2020, after often waiting as long as two hours before a state mobile crises team responded to a mental health call, according to BPD's Co-Responder Program Coordinator Lt. Abrem Ayana. It's mental health clinician is typically scheduled during the day when response from the state's mobile crisis team response could be prolonged due to distance and traffic, he said.

Ayana said that although officers had received Crisis Intervention Training to be able to recognize the signs and symptoms of mental illness, they weren't knowledgeable in resources and further assistance available for mental health.

"What we saw with creating this program or having those partnerships is that the mental health folks know the mental health resources, so utilizing those folks and their relationships to hook people up and make connections with resources streamlined the whole crisis response process," Ayana said. "You never take police out of the equation simply because these situations are tense and uncertain and rapidly evolving and people can be in possession of weapons. So, what we don't want to do is introduce a clinician or mental health specialists into those situations (where) they haven't been trained in self-defense."

Ayana said a misconception of the program is that involving a mental health clinician in police response is that it will result in "1013," or involuntary commitment, of a person in crisis. In actuality, he said, since starting the co-responder program, many patients have agreed to voluntary assistance or compliance, as often such cases stem from patients who have gone without taking prescribed medication.

Since starting the program, Ayana said the department has seen a decrease in the amount of people being arrested and the amount of time an officer spends at the scene, likely due to less intimidation since the person in crisis is able to speak with a person (clinician) who is not in uniform. The clinicians also often know the diversion status at hospitals and facilities, he said.

"Or even if it's the same amount of time, the police officers aren't the ones that are being involved in it and so it doesn't necessarily mean that they're the ones who are constantly going and having to deal with the same people, the same problems over and over thinking the system doesn't work," Ayana said. "It's at the very least, allowing the police officer to get some sort of mental respite, if you will, from encountering the same folks over and over again."

Ayana suggested that the program could likely help reduce officer burnout from not having to bear responsibility of mental health response.

"It's human nature to become indifferent to things after being exposed to it so much and if we can provide better resolutions to problems other than just cops, then maybe there will be more folks who want to be in this profession for longer," he said.

Some of the agencies said with the strain of filling vacancies and retaining officers, funding a co-responder program (outside of state assistance) presents a challenge.

"In my opinion, I think anything could help, and if we're to the point to where we're not comfortable with going out and trying to get this person to help, that that resource that's available to call would be a tremendous asset to law enforcement," Johnson said. "We do think it would be something that we need to at least have a good look at."

Lt. Ricky Long of the Dalton Police Department in Georgia said that while the co-responder initiative could be beneficial, it could also be detrimental by having another person at the scene.

"In my opinion, the ultimate goal would be I get there, call (the clinician) and they're there in less than 20 minutes," he suggested. "But when they're on scene with you, my fear is sometimes the officer will lose sight of the totality of what they're dealing with because you have that person in that crisis. Now you've got that extra person who's going into the equation that could, you know, unfortunately, be in harm's way. ... Even when I call one of these (mobile crisis teams) out to help us, once they get there, they're in harm's way. It's kind of a double-edged sword."

“We try to (respond to mental health calls) ourselves because when you dial the (Suicide Prevention Lifeline) number, we could not wait three or four hours for somebody to respond,” Baldwin County, Georgia Sheriff Bill Massee said. “We have to be reactive and react to the situation we're in and try to resolve it ourselves when we take them to a hospital or what we do. We have just found out sometimes it's easier for us to do it ourselves rather than wait on a (state mobile crisis) team.”

In the upcoming legislative session next year, Oliver said legislators are hoping to address transportation challenges for mental health.

"In fact, that's a big drill down we're doing now in in our next phase is to understand what are the transportation issues, particularly at rural communities, but all communities face. A person in mental health crisis, who transfers that patient and where? That's something that we're doing some intensive work on. We'll have some good information that we can bring into our next legislative session."

Athens, Alabama Police Chief Floyd Johnson said, though not familiar with the recent 9-8-8 hotline launch, he supports the initiative as a providing proper response.

"I think it would be a better alternative to the law enforcement and ER staff trying to stand it up until we can get mental health involved. That sounds like mental health responding from the giddyup," he said. "It's the first I've heard of it, but it's encouraging."

“If families can get their mentally ill people and get some treatment for them, then that takes care of the law enforcement. We don't get involved usually until people are off their medication, they’re in crisis, they're upset and that's caused them to do something adverse against their environment. Good community-based programs could stop a lot of the problems.

“The bottom line is, it's not just for law enforcement," he continued. "It's for the families that live with mentally ill family members. Those are the people that need the help more so than just law enforcement. We inherit the problem from families is what we did.”

Johnson is hopeful the addition of a new psychiatric-type facility in Huntsville will help get transports the help they need. As of now the city's officers transport to a nearby county for in-patient services where bed space is often limited.

In addition in May, Alabama Gov. Kay Ivey announced grant funding for two additional Mental Health Crisis Centers to join existing centers in Huntsville, Birmingham, Montgomery and Mobile that currently serve individuals with mental illness and substance use disorders; The centers are a designated place for community members, law enforcement and first responders to take an individual who is in mental health crisis.

Limestone County, which houses the Athens Police Department, is one of nearly 30 of the state's 67 counties that has a partnership with Stepping Up Alliance, a national initiative that provides followup services and check-ins following mental health related police encounters. Cullman County also partners with the Alliance.

"They're trying to reach out to these people to be sure they're staying on medication and see if they need to go back to be reevaluated," he said. "It's probably had one of the better effects of anything I've seen. It is not really complicated, just going out and making sure they're where they need to be."