Join Me in Early Voting This Week!

There is still time for early voting! You may vote early at multiple DeKalb County locations from 7am until 7pm, including at the Memorial Drive, Emory University and Tucker locations. Click here for more information on where to vote. 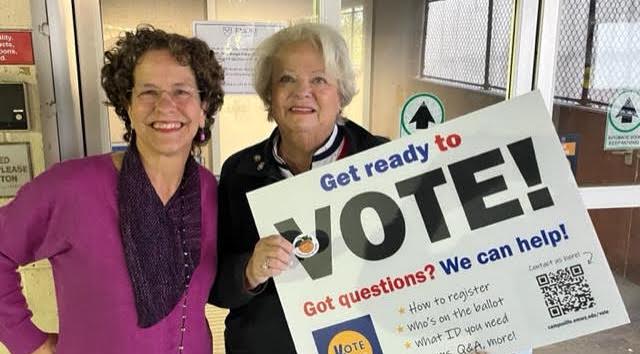 There is still time for early voting! You may vote early at multiple DeKalb County locations from 7am until 7pm, including at the Memorial Drive, Emory University and Tucker locations. Click here for more information on where to vote.

I am looking forward to many election night victory parties! STAY TUNED!

HOW DO YOU PLAN TO VOTE?

There will be constitutional amendments and statewide referendums on the November 8th ballot. I intend to vote yes on all of them, and will be reporting further on ballot initiatives in the next newsletter. Here is further information for your consideration from Ballotpedia on two amendments and two referendums:

For more information, go to:

On October 27th I chaired the Behavioral Health Reform and Innovation Commission Workforce & System Development Subcommittee meeting on workforce issues, including significant discussion on licensure and credentialing. Special thanks to all the members who attended both in-person and virtually, and special thanks to Camille Taylor and Betsy Theroux from House Media Services for helping to make our subcommittee meeting run smoothly.

Many of you comment to me on the impact of the film industry in Georgia---our success, national rankings, visibility of productions, and some of you question the economics of the tax credits which this year total $961 million. If you are interested in a deep dive audit, link to this analysis prepared by our state auditor.

Information reported has improved, but credit has not been capped

Steps have been taken to improve the accuracy of reporting on the film tax credit’s economic impact and evaluate the impact of state tax benefits more broadly. However, the credit has not been capped to control its growth, as recommended.

MMO IN THE NEWS

Thanks to Morehouse School of Medicine for the interview and for further publicizing Georgia's current mental health crisis.

I was interviewed by Carrie Teegardin of the Atlanta Journal Constitution for her October 26th article "Children's announces major gift, new center" about a $34 million dollar gift by the Zalik Family which will include a ten-acre site for a children's mental health center. "'I’m grateful that the Zalik Foundation is reaching out to meet our critical needs and I look forward to more news from Children’s about intensive psychiatric services for children," said Rep. Mary Margaret Oliver, D-Decatur, a co-sponsor of a mental health reform bill approved by the Georgia General Assembly this year.' Read the entire article here.

Thanks to Melita Easters and Georgia WIN List for their candidate profile. "Earlier this year, when House Speaker David Ralston needed a Democrat to champion his signature bi-partisan Mental Health Parity Act, he turned to Druid Hills native Rep. Mary Margaret Oliver, who has represented the area for more than three decades. Bringing the bill to unanimous passage in both houses required working with a Republican colleague to answer questions about the bill during ten public hearings under the Gold Dome and throughout the state as well as countless committee meetings to perfect the wording of the landmark legislation. The bill was based on input from numerous healthcare providers and previous studies. Rep. Oliver also chairs the MARTOC Committee as the only Democrat to chair a House Committee." Read the entire profile here.

Sunday campaign outings! Elena Parent, Matthew Wilson, Ed Lindsey, and I are all long time members of All Saints' Episcopal Church in downtown Atlanta. We were invited to speak on October 23rd about bipartisan and faith efforts.

Commissioners Ted Terry and Jeff Rader, joined by Gabriel Carter of the Association of County Commissioners, presented me with a lovely award this morning - a photograph of our historic courthouse in Decatur. I'm being honored by ACCG for my work on mental health reform and development authority analysis. Thank you!! More work to do!

For further evidence that Georgia is a battlefield state, ﻿I was visited on October 28th by a delegation from Germany and the Konrad Adenauer Stiftung Foundation. They have chosen to visit Georgia to understand the midterm elections of 2022. I told them I am optimistic for my Democrat friends but have no real idea what's going to happen on November 8th. Please vote!

On October 29th I attended an Eagle Scout Honor court ceremony for Decatur Troop 134 - founded in 1927! I also attended the fall festival for Clairmont Heights! Both very cool and encouraging.

QUICK LINKS FOR YOU

You can search for and track bills, watch the House (or Senate) in Session, watch committee hearings, monitor legislation by committee, and find contact information —- all on the revamped General Assembly website. Here are quick links:

Make your views known. Write to the leaders: