In second term, expect a ‘frank’ Kemp to push boundaries

“I fear the governor’s focus is too much on the national stage,” Democratic state Rep. Mary Margaret Oliver said. “I’m concerned he will not engage in the details of Georgia’s needs and our very diverse population.” 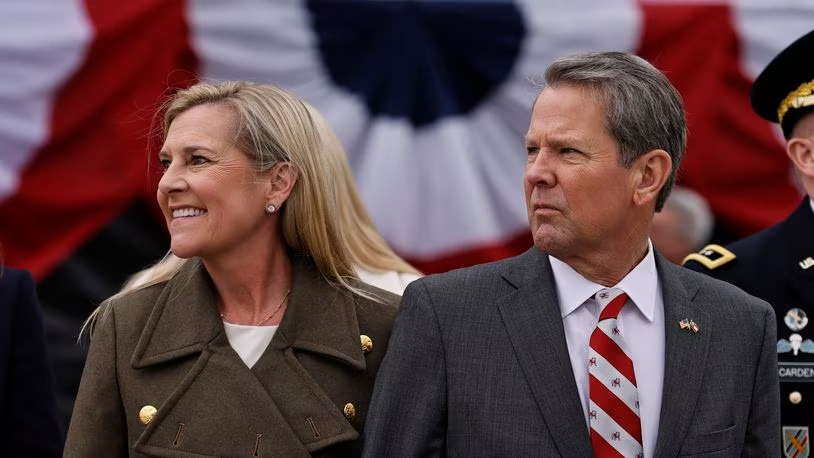 By Greg Bluestein, The Atlanta Journal-Constitution

As Gov. Brian Kemp confirmed details of a monumental solar energy expansion this week, he jolted the crowd of business executives and political officials by venting about the earlier-than-planned release of the project.

“It amazes me how much the locals in this state can keep these things a secret but our friends in Washington do not understand how economic development works,” the governor said as laughter rippled across the ballroom.

As the chuckles died down, the governor smiled as he explained the outburst: “I can be a little frank now in my second term.”

Unburdened by his reelection, the relentlessly on-message Kemp has given way to a looser version of himself.

When legislators gathered in Atlanta this week for the start of the legislative session, Kemp was in Los Angeles to delight in the University of Georgia’s college football championship rout of Texas Christian University in Los Angeles — and take tongue-in-cheek shots at West Coast policies.

After years of declining to say a “bad word” about Donald Trump for fear of antagonizing his loyalists, Kemp has swiped back at the former president who long vilified him.

And next week when Kemp outlines his budget proposal to legislators stuffed in a Gold Dome conference room, the governor will be speaking remotely from a Swiss ski resort where he will address an elite Davos conference of billionaires and foreign leaders at an event loathed by many in his party.

In short, after faithfully sticking to a well-honed message, Kemp is going off script.

“Everyone who wants to follow Kemp is trying to figure out how to replicate his win. In the meantime, he is setting his own tone and pace,” said Jay Morgan, a former Georgia GOP executive director. “He finally has a chance to really enjoy the job.”

This more unshackled version has only just surfaced. For the better part of the past two decades, Kemp has constantly campaigned as he strove for a string of statewide offices.

His narrow victory over Stacey Abrams in 2018 only granted a temporary reprieve; he prepared for a rematch almost as soon as he took office. And for the past two years, he tangled with pro-Trump forces who blamed him for the president’s 2020 defeat.

But Kemp’s takedown of Trump’s hand-picked candidate in the GOP primary and his thorough defeat of Abrams in November has left him the undisputed Republican political power in the state. Even Trump begrudgingly endorsed him shortly before the midterm.

Now a walking blueprint for how to overcome Trump’s opposition, expect Kemp to travel the nation to support like-minded candidates and seek bigger roles at the Republican Governors Association and other national organizations.

Already, he’s taken steps to expand his political apparatus. Some advisers see him as a potential running mate for a non-Trump contender — and, more likely, a potential 2026 challenger to Democratic U.S. Sen. Jon Ossoff, who attended the inauguration and has been dueling with the governor for credit over recent economic development deals.

But there’s danger in looking too far ahead.

“I fear the governor’s focus is too much on the national stage,” Democratic state Rep. Mary Margaret Oliver said. “I’m concerned he will not engage in the details of Georgia’s needs and our very diverse population.”

Even so, many Democrats found few reasons to quarrel with Kemp about the no-frills legislative agenda and record $32.5 billion budget proposal he unveiled Friday.

They include raises for teachers, a hefty increase in school funding and vows to bolster the electric-vehicle industry — all issues Democrats broadly support.

The Democratic Party of Georgia, which four years ago greeted Kemp’s inauguration with scathing attacks, this year responded to his swearing-in with silence. Other party leaders offered measured praise and assurances they’d work with him on consensus issues.

Democratic state Sen. Josh McLaurin acknowledged that Kemp seems “more confident and looser” with his reelection in the rearview. But he said his party would pressure the Republican to take more decisive action.

“Democrats would love to see state salaries move even further, to stay competitive with the private sector and prevent turnover and staffing shortages in many key agencies,” he said.

As he starts his second term, nothing shows Kemp’s new willingness to test political convention as much as the Republican’s unexpected decision to speak to hundreds of billionaires and dozens of heads of state at the World Economic Forum in Davos.

The gathering, loathed by many conservatives as a symbol of out-of-touch elitism, is an incongruous setting for a governor whose favorite pastimes include college football, a fresh Varsity hotdog and bush-hogging the land around his Athens property.

But his administration frames the overseas trip as a way to recruit new businesses to Georgia — and export his economic philosophy to global movers-and-shakers abhorred by many in his party.

In another strategic recalibration, the governor no longer avoids criticizing Trump, who demanded that Kemp overturn his election defeat and then vilified him when he refused.

Kemp dinged Trump publicly for the first time during his victory speech in November and has since said that the former president — and no one else — is squarely to blame for his 2020 defeat.

“President Trump and his reelection didn’t do a good enough job of telling people what he had done,” Kemp told Politico, “and what he wanted to do in a second term.”

The governor’s friends expect him to use his second term to push new boundaries in other ways.

“At the heart of it, Brian Kemp is an entrepreneur. He knows how to start businesses. He knows how to take risks,” said Martha Zoller, a GOP commentator and Kemp confidante. “Now that he’s in a second term he can really show that side of him.”